St. John’s, Newfoundland and Labrador – September 22, 2014 – While archaeologist Robert Anstey was in Twillingate, visiting home from his PhD studies at the University of Cambridge, he had the opportunity to analyze a very special set of artifacts from the area, his father’s collection.    Robert’s work was a pilot project made possible by the Newfoundland and Labrador Archaeological Society (NLAS).

Archaeologists lament the loss of context when an artifact is plucked out of a site without recording its relationship with the other artifacts and features surrounding it.   The systematic recording of all of the various complex components of an archaeological site is what separates the professional discipline of archaeology from the keen-eyed artifact collector, but it doesn’t mean that the relationship between archaeologist and collector is an unfriendly one.

In the spring of 2014, the NLAS received heritage funding through the Provincial Government of Newfoundland and Labrador’s Cultural Economic Development Program (CEDP) to hire an archaeologist to work with a private collector to analyze, record, and present a private collection to a wider audience.  The end result is a report and an online gallery of the James Anstey Collection on the NLAS website:

The James Anstey Collection is a perfect subject to launch CCARP.  Robert Anstey, who earned a BA and MA in archaeology at Memorial University of Newfoundland is the archaeologist selected by the NLAS to analyze the collection.  Robert Anstey is James Anstey’s son.   On one hand, this research is an archaeological analysis of a private collection of artifacts, but on the other hand it’s the work of a son, who has turned his father’s pursuit into a career.  An object without context is just a thing, whether it’s a report or an arrowhead picked up off the ground.  Understanding the context of that thing adds another layer of meaning and turns an object into a story. 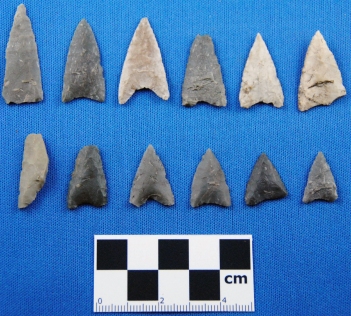 Dorset endblades from the Anstey site.