On August 22, 2015, the Newfoundland and Labrador Archaeological Society organized our first field trip.  We traveled to Hant’s Harbour to view the substantial stone features running north of the community.  Local tradition refers to these stone mounds and walls as Beothuk or even Maritime Archaic burial mounds or caribou drive lanes which were re-purposed and dismantled by later European settlers in the area (Trinity Stones, Facebook).  Archaeologists have investigated the remains and the construction details, archival research, and artifacts associated with the features point to a predominantly 19th century European origin of the features as the result of road building, garden clearing, cellar building, and the like (Penney 2014).  Despite the lack of any evidence for a Pre-Contact origin to any of the stone work, they are still remarkable archaeological features and well worth the visit.

We had beautiful weather and the 17 participants (and one dog!) thoroughly enjoyed the sites and sounds on our walk through the woods north of picturesque Hant’s Harbour.  The NLAS wishes to thank Grant Tucker for his animated tour of the features and all of the thoughtful discussion that flowed out of the afternoon.

Attached to the photo below is our report on this trip. 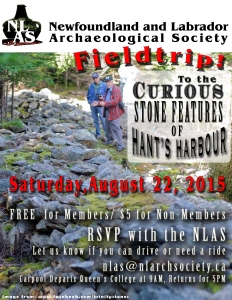