Since the current Board of the NLAS is also its first formal Board and there is an AGM coming up in November where many of these people will be replaced, we thought it would be interesting to get each board member to answer a series of questions about themselves and their role with the NLAS. Over the next few weeks we will post each board members response to those questions. Up next is Anita Kora, Chair of the Events Committee.

Egyptology! Cliche or not, I was interested in cultures of the deeper past because of the expressive and well studied culture of Ancient Egyptians. At some point, however, I began to think ‘hey, what about my people’s history?’ Throughout my (extended) post-secondary education, I dabbled in many disciplines, but it was two things that really got me hooked. The first was a one day trip, mapping Inuit sod houses composed of whale bone and grown over with sod on Sallikuluk, that instilled in me a desire to understand Inuit history. It was amazing standing in a place which was featured in legends and stories like that of Sikuliatsiujiutuk (the giant who kept stealing everyone’s food). The second was taking an anthropology class. While this wasn’t exactly what I wanted, it motivated and inspired me to move to St. John’s to begin archaeology.

During fieldwork in 2013, the crew went exploring on the western side of North Arm, Saglek Fiord, northern Labrador. Several burial cairns and caches dotted the hillside and I saw my first soapstone pot within the context of a disturbed site. It was one of several items moved from its original context due to a rock slide. It is one of my favourite artifacts and remains where it was found. 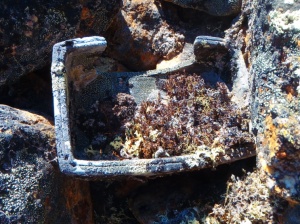 For a site, I can’t say most interesting because there are so many, but the most privileged place I have been able to work on would be Sallikuluk (Rose Island), Saglek Bay, northern Labrador. This place holds a deep importance to the history of Inuit and many other peoples which have resided there. It is a place of immense value – expressed by the many successions of families of various peoples who have lived there. In the 1970s, 113 Inuit were removed from their final resting places at Sallikuluk and Upernavik. These individuals were returned but placed within a mass grave. This greatly disrespects Inuit beliefs about the afterlife. So, Sallikuluk, as it is with many archaeological sites, is a place of lessons. To teach us as archaeologists that when we encounter burial sites that these were human beings with their own sense of place and identity; that we must take care when excavating and be honest and truthful; and that we must give respect to those we find and when we are done to continue to let them on their journey in the afterlife. We have archaeological methodology on how we excavate and treat human remains, but it doesn’t mean we cannot and should not be respectful of cultural traditions or practices. Where possible, as should have been the case for Sallikuluk, working with descendents if they are present should be common practice, to ensure the individuals we find are treated in the manner which respects them most.

I kept an advice list written by Makere (Margaret) Rika-Heke – a Maori archaeologist from New Zealand, from the chapter Haere Tika Tonu Atu – Keep Going Forward (2012) on my person. It reads: