The Dirt on Your Directors: Tim Rast

Since the current Board of the NLAS is also its first formal Board and there is an AGM coming up in November where many of these people will be replaced, we thought it would be interesting to get each board member to answer a series of questions about themselves and their role with the NLAS. Over the next few weeks we will post each board members response to those questions. Up next is Tim Rast, President of the NLAS.

As the President, I get to help with all aspects of the Newfoundland and Labrador Archaeological Society.  I set the agenda and chair meetings of the Executive Committee and the Board of Directors, which are scheduled on alternating months throughout the year.  I’m tasked with speaking on behalf of the NLAS when dealing with the media or other organizations.  That means that I’m on the teams of people that apply for funding, plan the direction of the NLAS, organize events, write reports, and communicate with the public. I’m very proud to be the first president and a founding member of the Newfoundland and Labrador Archaeological Society.  Alas, my two years are up.  Next year I’ll be the Past President and will help the new President lead the NLAS in every way that I can.

I think it’s impossible to be a good archaeologist without a well developed sense of empathy.  Empathy is defined as the ability to identify with or understand another’s situation or feelings.  When trying to understand a foreign or past group of people I believe that an archaeologist needs to be the sort of person who will make every effort to overcome their own biases and see the world from the perspective of the people that they are trying to understand. In practical terms, this means getting out into nature, experimenting with ancient technologies, and if you are not a descendant of the people you are studying, then listen to the folks who are.   Archaeology is not a solo pursuit.   An empathetic archaeologist will make a more likable and easier colleague to work with in an isolated field camp, a crowded laboratory, or on a committee.  Empathy is the one thing that every archaeologist needs in order to be good at their job of interpreting the past and to be the sort of pleasant person that other people will want to work with again.

I saw the benefit of provincial archaeological societies in other parts of Canada, especially Alberta and Saskatchewan, and felt that Newfoundland and Labrador was missing out by not having a society of our own.  Growing up in southern Alberta, my first exposure to archaeology was by becoming a member of the Archaeological Society of Alberta and attending lectures and volunteer opportunities that they organized.  There are well established archaeological entities here in Newfoundland and Labrador affiliated with the Provincial Government, Memorial University, and individual communities. These organizations do a fantastic job of protecting and promoting archaeology in the Province.  I wanted to be involved with the NLAS to help share those contributions with as wide an audience as possible.  Newfoundland and Labrador has an exciting archaeological past and I wanted to be a part of telling it’s story. 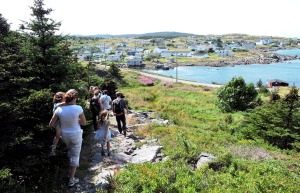 I hope that it is around for a long, long time. I hope that it succeeds in informing all curious Newfoundlanders and Labradorians about the thrilling archaeological discoveries that are happening all around us.  I hope that all students, professional archaeologists, and interested members of the public will become members of the society and that the NLAS provides them with meaningful opportunities, information, and dialogue about our shared interest in the past.

This entry was posted in Uncategorized. Bookmark the permalink.